Did you know that Swedes are pros in adding weird spices to their baking products? The spices themselves are not weird, but adding them to pastries and making them work is a bit weird. At least the first time you try it, but afterward you can't imagine anymore how to live without spiced buns.

OK, not that weird. Who doesn't love a good cinnamon cake with some refreshing icing on top? Or without. It is also no surprise that cinnamon rolls are delicious. 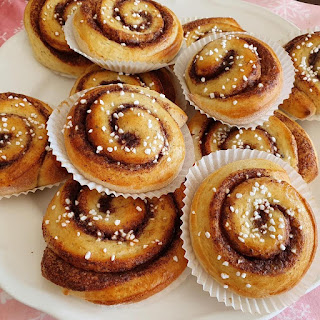 Who would come up with the idea of using cardamom in baking goods? The Swedes (not only I know)! There are cardamom buns, but the ultimate invention is eaten traditionally on fat Tuesday and is called Semla. It is a cardamom bun, opened at 1/4 from the top, with an almond filling and whipped cream. No words can explain how delicious they are and I can't live without them anymore. Of course, we don't eat them only on fat Tuesday, as I have many years to catch up from all the time I did not live in Sweden :) 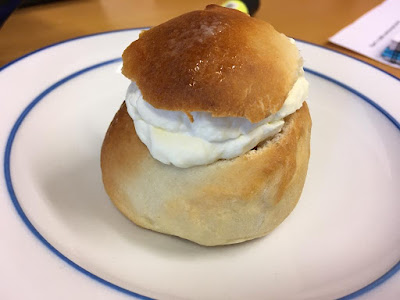 Who would come up with the idea of using Saffran in baking goods? Yes, it's the swedes again (and again they might not be the only ones). The most popular are the Lucia buns eaten on Lucia day (December 13th, see advent posting day 13). The buns are a beautiful unique yellow and absolutely delicious, especially on the same day and with a cup of tea or coffee. 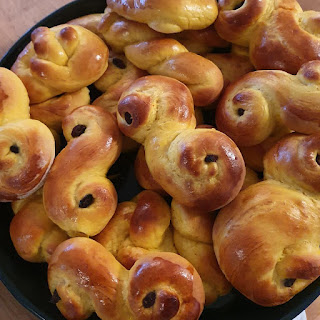 Homemade Lussekatter or Lucia buns
There are other saffran baked goods, such as cakes, biscotti and something similar to brownies. Try it if you dare!

What could possibly have all of the spices above and be sweet? Are you sure you don't know?

Gingerbread cookies of course! The Swedes eat them around Christmas and prefer them thin and crispy, although thicker and used in house building projects are also quite popular. Coming December all homes, offices, and events fill up with boxes of gingerbread cookies and no one seems to get tired of them. 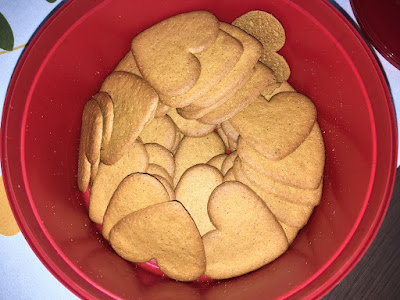