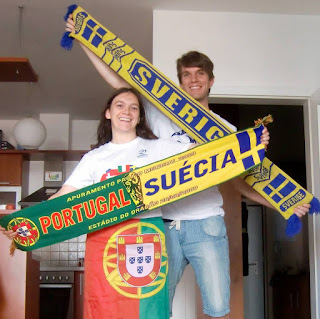 Tuesday evening was the final match of the Under 21 championship in football. We both bought the official shirt of the championship (because the shirts of our countries are elsewhere), grabbed our scarves and headed for the stadium. The atmosphere in the stadium was amazing!! The yellow shirts of the swedes popped out, while the red shirts of the portuguese blended with the red chairs of the stadium. The same way, the Swedish supporters could be heard miles away, while the portuguese voices got lost. 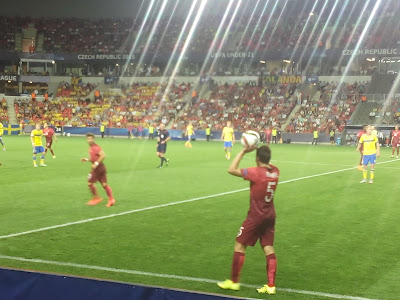 We tried, of course, to shout for Portugal but we were not enough. Having heard all the swedish songs in the semifinal match for 2h, I couldn't help but sing along with them. Their enthusiasm was contagious and I was glad I had a good excuse to scream Sverige! 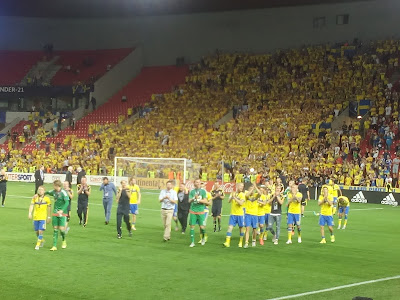 The champions with the supporters behind. The supporters were spread a bit everywhere around the stadium but the biggest block was behind that goal.

The match itself was quite balanced and exciting, even though it ended up 0-0. It went to penalties. When I saw that the penalties would be scored in the goal just next to the swedish supporters I knew Portugal would fail. The pressure was so incredibly high, the booing was so loud, it was impossible to not get affected. And so it was... Sweden became an European champion! 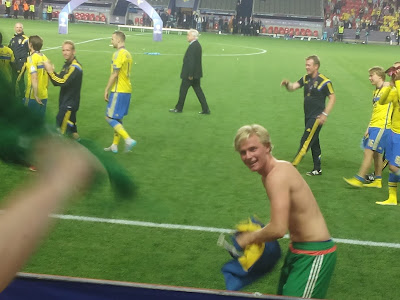 Carlgren, the swedish goalkeeper, exchanging his shirt by a supporter's flag. 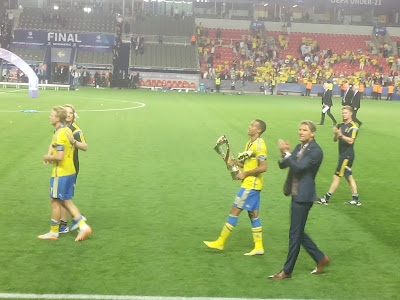 The swedish coach and the cup.

And I celebrated like if it was my own country. I can't really explain how or why, but the truth is I was really happy for them. The supporters deserved it. In 3 days, they managed to organise buses and bring 4000 people here. They came from everywhere and they shouted for over 3h, restless, happy, just like children. It was beautiful!
Publicada por Sara à(s) 21:58:00