I wanted to write this today because it is fresh in my memory and I do want to remember the details. I will not publish this post just yet, but it will be published in the right time.

We planned a summer trip to the UK and Ireland. Firstly, I would go 3 days to Edinburgh with Johan. From there we would go to Belfast, in Northern Ireland, where his brother would join us and later on we would go down to Dublin, in Ireland, where we would run a half marathon. Johan lived in Edinburgh for 3 years. It was nice to go back as it brought us, more him than me of course, a lot of good memories. We have been engaged for about 8 months by now, but we are planning to have the wedding only in 2018. I was never too much of a girly girl and I had no idea what kind of dress I wanted to wear in my wedding party. All I knew was that I did not want to be a traditional bride. No white dresses, unless they had some really cool and different design. No long princess-like dresses. Nothing expensive. Somehow, I always felt I would rather spend big money on a nice trip than on a dress that I would only wear for half a day. With that in mind I thought it would be a good idea to just look at different models, colours, options to start figuring out what would I wear. Edinburgh seemed a nice place to start. I have always enjoyed shopping in the UK and since I was there I decided to have a look in some shops.

It was Monday morning. We were walking towards Princes street, the shopping street, when we passed a shop with gorgeous and colourful dress-up clothes. There was a particular skirt + top combination that caught my eye. Johan, walking a few steps ahead of me turned around and said "you liked that, no". I was very impressed. The boy who never notices anything, had not only noticed there was something there but also that it was something that I liked. After some moments of hesitation we decided to go back and enter the shop. They had really gorgeous outfits. The materials were lovely and the colours adorable. That particular one on the window was just beautiful. I did not try it on. It would probably make me fat. 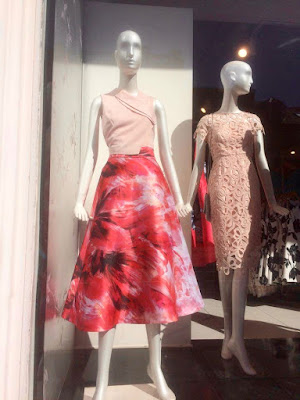 We went to Princes street and looked for dresses the whole morning and part of the afternoon. Nothing was to my taste. Everything was too normal, nothing seemed special enough. And the damn outfit in the window did not let go of me! In the end of the day I told Johan I wanted to go and try it on. The shape of the skirt made me think that it would not make me look good, so I could just as well go and try it, to get it out of my system. I tried it on. The lady working there was really nice and lend me some matching heels to see the full effect. As I stepped out of the cabin into the big mirror I loved it. It looked gorgeous! Johan loved it too. Very well... now I was thinking about it even more. We went back to the hotel weighting the pros and cons of buying that outfit. The biggest disadvantage was that the wedding is only in 2 years and my taste can change in the meantime. I wanted some girly opinion as well, to see if I was not completely crazy. I sent two pictures to my sister. She hated it. The colours, the shape, it was not me at all. Am I crazy?

I checked that the same shop existed both in Belfast and in Dublin, and that gave me a full week to think about it. When we got to Belfast, we had to wait for Johan's brother in the bus station. There was a shopping centre just about 10 minutes from there and Johan suggested that I go there and see that they did have the same outfit. They did. On the window. I fell in love with it again. It was also then that I got over the pain of the fact that my beloved sister, who I adore so much, was so much against it. Assuming that it was a too big shock for her, a more traditional girl, that I would be wearing something colourful in my wedding, I emailed the photos to 2 friends. One of them works in fashion. The responses couldn't have been more positive. They both told me it was gorgeous and it fit me well. Whether that would still be in fashion in 2 years was questionable but they also told me that something beautiful would always be something beautiful. Every time I passed near that shopping centre I went near the shop and looked at the window. I didn't want to rush. I would wait until Dublin.

We got to Dublin around lunchtime. We ate something, picked up the start numbers to the races and wondered around. We ended up very near one of places I knew they had the same shop. I told the boys I wanted to go in and I would try it again. They came with me. On the way there I remember passing by a bus stop in which the next bus was going to a place called "Bride st.". No I did not want to make my decision based in signs from bus stops. I tried the same outfit. I loved it again. I tried different tops but the original one was still my favourite. I decided to buy it. D. also said that since it was not that expensive and not that eccentric even if I changed my mind in the future I could still wear it in another occasion. And I bought it! I bought it! There, in that very busy crossing in Dublin, wearing jeans shorts and a t-shirt, accompanied by the groom and the brother, I bought my wedding outfit. This was really unexpected. I never thought I would return from my trip with my wedding outfit.

I am not known for doing things in the conventional way, but what's conventional anyway? I have met so many different people throughout my life that no matter what I do or how I do something it will always be normal to some, out of the ordinary to others and probably a bit crazy sometimes. Still, I did not expect to go against tradition this much. I am enjoying the feeling of being different though.

My dress is not a dress.
It is not white.
It is not long.
The groom was the first one to see it.
My mom has no idea I bought it.
My sister doesn't like it (but she has only seen it in 2 pictures, so there's hope).
I bought it together with the two least fashionable men I know.
It doesn't matter whether people will think I'm not a proper bride or that I do not look good enough. It doesn't matter because I love it and it is what I want.
Every time I look at it I know that it's beautiful, that it represents me and that I do want to use it in my wedding party. I am sure of that now because today, as I tried it at home, in the quietness of my bedroom I felt like a bride for the first time.